Sometimes we get curious about random, interesting facts about solar and thought you might be curious too! Check out some of our favorite solar energy facts below.

When was the first solar panel made?

There have been multiple steps that led to the invention of the first solar panel… starting all the way back to when the Greeks and Romans used mirrors to reflect the sun’s light to start fires! The concept of solar energy was ignited in 1838 when a French physicist named Alexandre Edmond Becquerel discovered the photovoltaic effect (when light strikes a semiconductor material and increases the mobility of its electrons, the voltage moves them in a specific direction and an electric current is generated). But we can credit the creation of the first solar device to Charles Fritts in 1883. Charles was able to create a box-like device that produced the photovoltaic effect, and that device became the origin of solar panels! Read more about Charles Fritts, here. 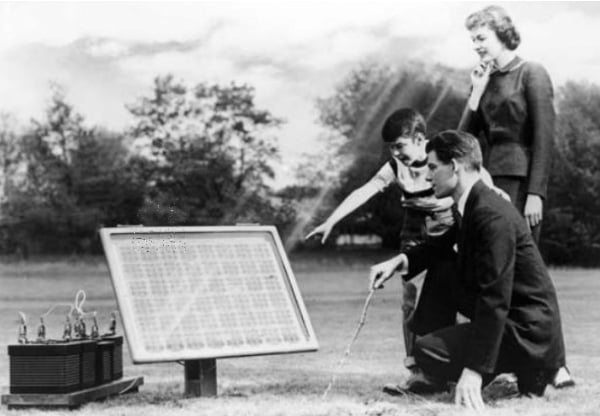 Solar energy produces 3.6% of global energy and 3% of U.S. energy. This year, it’s predicted that solar will account for 60% of the increase in global renewable capacity (making the global total more than 300 gigawatts – to put that into perspective, one gigawatt is enough energy to power 750,000 homes!).

What country uses the most solar power

China uses the most solar power, Europe comes in second, and the U.S. comes in third. During a research study done by Harvard in 2021 on China’s solar future, Xi Lu, an Associate Professor of the School of Environment at Tsinghua University said:

“Today, subsidy free solar power has become cheaper than coal power in most parts of China, and this cost competitive advantage will soon expand to the whole country due to technology advances and cost declines.”

How many panels are in the largest solar installation

The largest solar installation in the world is India’s Bhadla Solar Park. It is in Rajasthan, a state in northern India, and takes up 14,000 acres. The 10 million panels generate 2245 MW of energy. Check out this video with more info on the installation:

How big is a solar panel and how much does it weigh?

Can solar panels be recycled?

How strong is a solar panel and can it hold up to hail?

Solar panels are made to be resilient since they are exposed to so many elements and weather conditions. During testing, solar panels are exposed to extreme temperatures (both hot and cold), high humidity conditions, strong wind forces, and heavy loads that simulate snow or ice pack. They are also blasted with simulated hail; the international standards require that solar panels can withstand 25mm (1 inch) diameter hailstones traveling at 23 meters per second (51 miles per hour).

How much solar would be needed to power the whole world for a year?

The sun can provide us with 860,000 times more energy than we need each year, which means we should probably take advantage of that, right!? An area the size of just 1.2% of the Sahara Desert would need to be covered with solar panels to power the world each year.