This one is for you, parents! Yes, it says solar energy for kids in the title, but we’re also hoping you get a moment of reprieve, too. We’ve compiled solar related activities for a wide range of ages, and we also provide a quick primer on the science behind solar energy for kids. Solar energy is not only a fun STEM topic, but it’s also one of the many puzzle pieces that can address the climate crisis we’re facing.

If you’d like advice on how to have a more serious conversation about climate change with your kids, NPR's Life Kit series has a great 20-minute podcast on the subject, “How to Talk to Kids About Climate Change.” It’s a helpful resource for talking to younger and older kids about this complex issue.

Each solar panel is made up of lots of connected solar cells, and these cells are made up of a few layers of materials. There are two layers of silicon (the second most abundant element in the Earth’s crust) that are sandwiched between conductive material. One side of the silicon sandwich has extra electrons (making it negatively charged), and the other has extra holes for electrons to move into (making it positively charged). 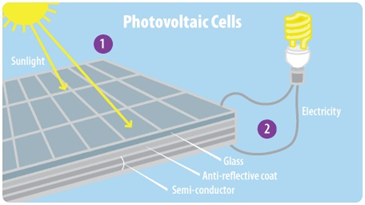 When sunlight hits the silicon, the energy from the sun knocks electrons in the negatively charged side of silicon loose. These electrons then flow through the conductive material to the positively charged side of silicon, creating an electric current. This direct current (DC) flows from your solar cells in your solar panels to what is known as an inverter. Inverters convert DC voltage to alternating current (AC) voltage, which powers your home.

Once they’re done doing their jobs, the electrons that were knocked loose return to their original spots in the silicon, so there’s nothing that gets worn out or used up! This endless loop makes it so solar panels can make clean electricity for decades.

Check out this TED-Ed video for a more visual explanation of how solar panels work:

That’s enough science and history for now. Let’s inject some fun into these conversations about solar energy with some more hands on games and experiments for kids. There are many solar energy activities for kids, so we’ve split it out into age group.

Who’s Who in Solar History

The history of solar is filled with lots of interesting facts and characters. There have been lots of people who played a role to make solar power happen. These historical figures are great for pointing out milestones in solar technology development when explaining solar energy for kids.

Unfortunately, whether we like it or not, the climate crisis is here, and kids are paying attention to how we react. Discussing serious topics like global warming and pollution is tough, but the more we arm kids with knowledge (and ourselves) the more prepared they’ll be. We believe clean, renewable energy, especially solar, is a better way to power the future, and that by educating the next generation on solar energy we can continue to make our world a better place.

What Does It Mean to Work for a B Corp?

Transparency in Business: What We've Learned at Namasté Solar

The Namaste Solar Story: Part One – The Origin Story